One of my ancestors has become somewhat better known than he ever expected. This was my grandfather John Campbell who, for most of his life was a policeman. As an inspector in the Staffordshire Constabulary he was involved in the arrest of George Edalji (pronounced 'Ay-dal-ji') at his office in Birmingham in August 1904. I think he was also involved in collecting evidence, but I have no family records or anecdotes about his involvement. He later became a superintendent in Handsworth.

This case became notorious when Sir Arthur Conan Doyle took an interest, writing newspaper articles about it, later campaigning successfully for George's release and a government pardon. That led to the establishment of the Court of Appeal. 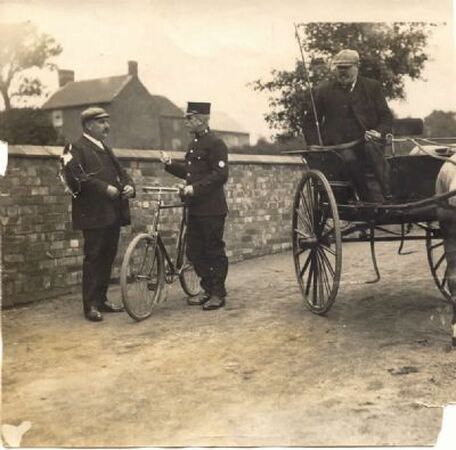 Alleged to show George Edalji in court.
There are four books entirely devoted to the case:

The Story of Mr George Edalji (Grey House Books, 1985), mainly a reproduction of Conan Doyle's newspaper articles, edited and with an introduction by Richard and Molly Whittington-Egan;
​Arthur & George (Cape, 2005;  Vintage, 2006) by Julian Barnes. This is a historical novel, so not entirely reliable (see my article 'Making up History’, in the Spring 2007 issue of The Skeptic on my Articles page).
Conan Doyle and the Parson's Son (Vanguard Press, 2006) by Gordon Weaver.
Outrage: The Edalji Five and the Shadow of Sherlock Holmes (Vanguard Press, 2010) by Roger Oldfield. www.outrage-rogeroldfield.co.uk. A most comprehensive and detailed account by a local historian of what happened;
The Mystery of the Parsee Lawyer (Bloomsbury, 2021) by Shrabani Basu. An extensive account.
[Oldfield gives a full list of books and dramatisations]
This
There are also books that mention the case, eg:
pp 166-179 in Compton Mackenzie's On Moral Courage (Collins 1962);
The Real World of Sherlock Holmes, by Peter Costello (Robinson, 1991);
The Adventures of Arthur Conan Doyle, by Russell Miller (Harvill Secker, 2008).

Dramatisations
The case has been dramatised several times, first as a play by Roger Woddis, Conan Doyle Investigates, at the Victoria Theatre in the Potteries in 1971.
I have read that it featured in an episode of the 1972 BBC television series The Edwardians. However, I have not been able to verify that.
On 12 Dec 1987 BBC Radio 4 broadcast the play Conan Doyle and the Edalji Case. in which John Campbell was played by Anthony Jackson, but with an inappropriate Scottish accent (my grandfather had a local accent).
In January 1995, BBC Radio 4 broadcast Tony Mulholland's Conan Doyle's Strangest Case. It was rebroadcast several times, the last on 13 Dec 2020.
On 25 Dec 2005, BBC4 aired a TV documentary: Conan Doyle for the Defence. in which John Campbell was played by Anthony Jackson, again with an inappropriate Scottish accent.
David Edgar has turned Julian Barnes's book into a play, which was performed at the Birmingham Repertory Theatre from 19 Mar to 10 Apr 2010 and at the Nottingham Playhouse from 22 Apr to 8 May 2010. The script of the play and a copy of David Edgar's Guardian article (13 Mar 2010) was published as a booklet published by Nick Hern Books Ltd (2010).
In March 2015, ITV broadcast a fanciful and over-dramatised mini-3-part series (Arthur and George) allegedly based on Julian Barnes's book, with Martin Clunes as Conan Doyle. Inspector Campbell, inappropriately in uniform, had a minor part. He was played by Alan McKenna, who did not have the stout form of my grandfather. This series is available on YouTube.

Gossip
According to Mike Harley, a local writer, John Campbell did most of the work on the case and, for some time, was at odds with his superiors over the question of the perpetrator. Compton Mackenzie claims that Inspector Campbell 'knew who was guilty of the mutilations and he decided to arrest him'. I don't know how CM could know that and it seems that he's borrowed from ACD's writings. The whole police investigation appears to have been bungled and I don't like to think that my grandfather was responsible. I like to think that he was conscientiously doing what he was told to do by his superiors.